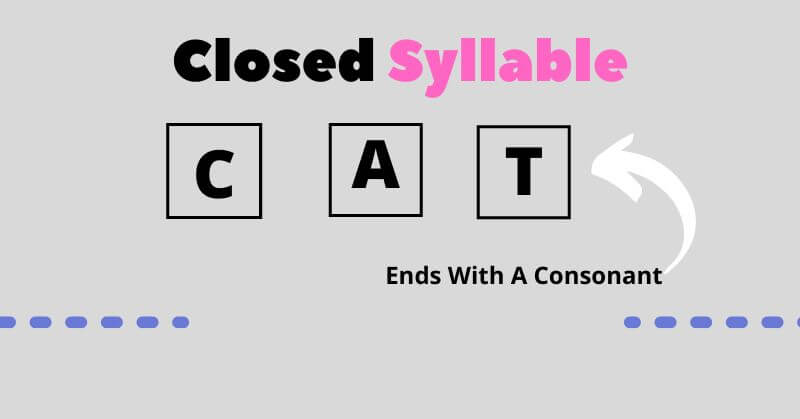 You might also be interested in learning about: What is a syllable? 5 Differences Between Closed And Open Syllables

Closed syllables come in different patterns. They include CVC words; words end in –ck, -tch, -dge, and the FLOSS rule.

CVC closed syllables have a consonant-vowel-consonant pattern to form a syllable. Examples are bat, cat, and men. Here the center vowel is covered with a consonant on both sides. The consonant at the end makes the vowel sound end in short.

This pattern has a short vowel sound that ends with /k/ sound. These words are end with consonants /-ck/. Examples of this pattern are back, rock, and luck.

The words with this pattern have short vowels immediately followed by the /ch/ sound that ends with the consonants –tch. In this pattern, the ch sound attaches to the vowel sound. Examples of this type are patch and witch.

There are few words that end with ch without t. The ch consonants in this type will come after the short vowel or a long vowel sound. Examples of this type include punch and coach. Here the word punch has a short vowel and ends in consonants. It is an example of a closed syllable.

In this pattern, the word ends in /j/ sound and has spelling ends with –dge or –ge. Examples include judge, age, and edge. Words in this pattern have spelling –dge will have a short vowel sound and end with /j/ sound. You can see this type in these examples of words like edge and judge.

In the FLOSS rule, the words has one syllable and end in f, l, or s, double the f, l, or s. Since it has one short vowel sound and ends with consonants, it can treat as a closed syllable.

Examples of FLOSS rules are grass, fall, and sniff.

These are the patterns in which the closed syllables can come. In the above patterns, the words with a short vowel sound followed by one or more consonants can treat as closed vowels.