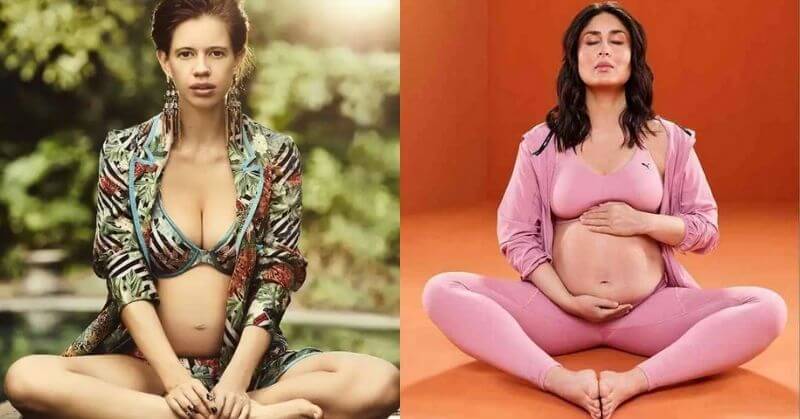 One of the most beautiful phases in a woman’s life is Pregnancy.  This phase does not just make her feel special or happy but it completes her.  It might be difficult for women from the modeling or entertainment industry to deal with pre and post-pregnancy side effects. However, many models and actresses in Bollywood and Television broke the stereotype by embracing their baby bump publicly. Thanks to our Bollywood divas who inspire every woman to embrace this and taking it to the next level.

During the lockdown, we’ve got to know about the pregnancies of many actresses such as Kareena Kapoor Khan, Anushka Sharma, Anita Hasnandani, and many more. Oh! so happy moments in the crucial times. Dealing with cliché comments and body shaming during pregnancy in India is hard and when you’re a celebrity it’s even harder. In this blog, we will talk about the top 15 celebrities who flaunted their baby bump gracefully in public.

Being a part of the glamourous world, Kareena never misses a chance to spread her charm. Even when it comes to pregnancy, she took this out on social media and in public appearances even more gracefully. Bebo gave birth to two cute little boys, Taimur Ali Khan (2016) and Jehangir Ali Khan (2021). She continued to work and simultaneously take care of her health via Yoga. Along with this, Kareena Kapoor Khan embellished all kinds of outfits during her pregnancy period both times.

Anushka Sharma and Virat Kohli welcomed a baby girl, Vamika this year. The couple shared this beautiful news on social media with their fans and became a trendsetter. During the whole pregnancy period, Virat was busy with IPL and Anushka was busy in her own career along with her Yoga sessions. They both confidently turned this pregnancy into an awe-inspiring one. Anushka Sharma did a maternity shoot and was featured in Vogue India magazine’s January 2021 edition sharing her pregnancy experience.

Being a mother of two boys, Zack (2017) and Leo (2020), Lisa Haydon happily welcomed her third baby Lara, this year.  Earlier, during both pregnancies, Lisa used to post beautiful pictures of her baby bump on social media and it has gone viral too. Lisa keeps flaunting baby bump. During her third one, she was also featured in Harper’s Bazaar India.

The happy couple, Genelia D’Souza and Riteish Deshmukh are parents to two handsome sons, Riaan Deshmukh (2014) and Rahyl Deshmukh (2016). Due to her pregnancy, she took a break from the industry and shared beautiful monochromatic pictures of her baby bump. Genelia is very active on social media, she’s entertaining her fans through funny videos, Instagram reels with her husband and kids. Presently, she is taking care of her kids. Recently, on The Kapil Sharma Show, she was asked about her comeback in the movies to which she replied positively.

The stunning Pataudi girl tied the knot with charming Kunal Kemmu in 2015. Both are successful in their career and are admired by their fans a lot. In 2017, Soha gave birth to a beautiful baby girl named Naumi Kemmu. She didn’t let her pregnancy stop her from doing shoots and gymming as her daily routine. Khan-Kemmu’s family also organized Soha’s grand baby shower party for friends and family.

Model and actress, Natasa Stankovic and Hardik Pandya recently welcomed baby boy Agastya in 2021. During her pregnancy, she continued her Yoga routine, shoots, and vacations. The couple announced the good news on social media during the lockdown and got viral. She posted loads of pictures on Instagram showing her baby bump.

The great actress Neha Dhupia gave birth to a baby girl Mehar Dhupia Bedi in 2018. She has always been a great trendsetter by never giving up on her daily routine, brand endorsements, and other work. During her pregnancy, she didn’t take a break from her own live podcast. Furthermore, she’s all set to welcome her second baby as she recently announced it with an adorable Instagram post.

Famous actress and writer, Kalki Koechlin set social media on fire by announcing her pregnancy. In an interview, she revealed that she’s pregnant with her boyfriend.

One of the sensational Bollywood heroines, Shilpa Shetty known for her zero figure and healthy living. During her pregnancy, she continued her Ad shoots, public appearances, and most importantly her Yoga routine. She is now a mother of 2 kids Viaan Kundra (2012) and currently, in 2020, she gave birth to a cute girl Samisha via surrogacy.

Actress and director, Konkona made a lot of public appearances during her pregnancy. She got married to Ranvir Shorey during her trimester in 2010. The couple welcomed a baby boy Haroon Shorey in 2011. Recently, in 2020 the couple got divorced and share custody of their kid cordially.

A simple yet beautiful lady comes from a non-Bollywood world. Above all, she is very active on social media with a huge fan base. Mira posts great tips on fashion and lifestyle on her social media to keep people motivated and engaged. Mira and Shahid Kapoor tied the knot in 2015 and have 2 kids. Misha Kapoor (2016) and Zain Kapoor (2018). In a chat show, Koffee with Karan, she revealed how difficult was it to deal with the paparazzi in public places during pregnancy. As she was not from the Bollywood background but she took it gracefully.

Beautiful and gorgeous Aish is a yummy mummy of a beautiful girl Aradhya Bachchan in 2011. She gave many international appearances at film festivals and flaunted her baby bump while doing a ramp walk. During her pregnancy, she had a lead role in the film Heroine in her hands. But due to her pregnancy, she took a sabbatical from films and Ads but after some time she made a comeback from Jazba in 2015.

The beautiful lady who recently got married is in lockdown. She announced her pregnancy while she was on her honeymoon in the Maldives. Dia flaunted her baby bump in different stylish clothing shoots on social media. She also revealed that pregnancy is an additional blessing they found while they were planning for the wedding.

The talented singer, Neeti Mohan tied the knot with actor Nihaar Pandya in 2019. The couple announced the good news on their 2nd anniversary in February 2021. She won lots of awards and gave us melodious Hindi songs. In an interview, she revealed that A.R Rahman discovered her singing skills and helped her to grow. Now she has become one of the most successful singing sensational in India.

Being a successful actress and entrepreneur she isn’t the one who shies away from the camera during something as natural as pregnancy. Twinkle is a mother of two and at the time of Nitara, she never missed a chance to flaunt her baby bump while experimenting on her clothing range. She gave great poses in Indian, western, Indo-western, and whatnot in all her public appearances.

One must take motivation from Lara Dutta’s impeccable styling during pregnancy. During pregnancy, she showed how to carry herself gracefully in loose-fitting dresses and tops. Lara became a trendsetter thereafter. She not only flaunted her baby bump but also promoted prenatal yoga that she followed.

These celebrities proved that those days are gone when a woman has to sit inside the four walls during their pregnancy. Flaunt that baby bump confidently wherever you go. It is a blessing from the supreme, never feel bad or ashamed about it. We agree that it may give you different shapes and hormonal issues but in the end, it’s a beautiful feeling of womanhood. Flaunt it like Kareena or Anushka or any of your favorites in the most possible trendy way.

Also, Read Celebrities All Set to Welcome Their Baby During Lockdown!